Want to suggest an article or write one yourself? Read this info page.

I was recently given the opportunity to review my first product on this site – an e-book titled Network Your Computers & Devices: Step by Step. The aim of this book is to guide users in setting up a home network where computers of varying operating systems can share files wirelessly. It is targeted toward those of beginner-level knowledge and follows easy step-by-step instructions supplemented by appropriately chosen screenshots to further help beginners understand networking tools.

The book includes specific instructions for two wireless routers – the Belkin N+ and the D-Link DIR-615 models – and steps to share Windows 7 computers with Windows Vista, Windows XP, Mac OSX, and the Ubuntu Linux distribution. It follows the assumption that your computers are all connected through a router, which is then 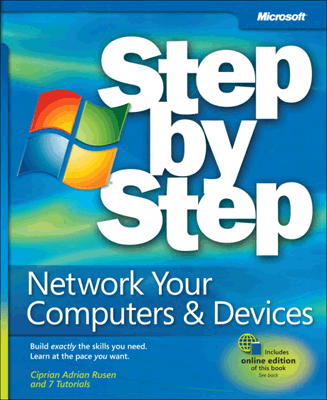 connected to the Internet. This is a very common network design and one my own home network follows.

The book is task focused, so you can skip directly to the task you are looking to perform instead of reading it all the way through. The book is separated into 15 chapters of similar tasks and each chapter ends with a bulleted list of key points taken from that chapter. The chapter titles are as follows:

What I really liked about this book is that it’s up to date with today’s technologies and lifestyles. The book recognizes that a growing number of households use varying operating systems. Although the book is prominently about Windows 7, it allows other family members to connect their Mac OSX 10.6 (Snow Leopard), Ubuntu Linux 10.10 (Maverick Meerkat), and legacy Windows (Vista & XP) computers together. It encourages the more secure wireless encryption WPA2-PSK over the more common and easily crack-able WEP standard and details the powerful firewall built into Windows 7.

If you run into trouble getting the network to function after following the steps, the troubleshooting chapter will enlighten you with areas to check. Included in this chapter are detailed troubleshooting wizards and flowcharts, configuring the proper date and time (yes, that can cause problems too), and the port forwarding settings found on your router.

Followed by the chapters is a 5-page glossary of technical terms you will happen to find throughout the book. This makes it a great reference guide. After the glossary is a thorough 15-page index of everything covered in the book. When you’re not quite sure what you’re looking for, an index can be a helpful guide.

Although I did find this book to be informative and accurate, there were changes I would have made if it were my work. The first thing is the pictures. Whenever necessary to aid in explaining a step, a screenshot was added. Unfortunately, most of the screenshots selected are overly compressed at the cost of a clear picture. For example, take this screenshot from chapter 3 during the task of modifying a Library’s properties (pg. 70):

I can understand the screenshot well because I’m experienced and I zoomed in, but a beginner to this task might have some difficulty. Please be aware that this is in the e-book version of the publication, which may have been further compressed to conserve download size. The paperback version may have clearer screenshots.

Some of the screenshots are difficult to read, not just because of image compression, but also because of poor cropping. Most specifically, the screenshots in the Getting Help section before chapter 1 could have been cropped horizontally and then expanded for a clearer understanding of what the screenshot is supposed to display. It looks like they were taken in a wide screen resolution, which adds excessive white space to the screenshot. The screenshot therefore needed to be shrunk to fit on the page.

I also disagree about the relevance of certain sections. Chapter 2 discusses the varying types of user accounts in Windows 7, which I agree is important to understand, but steps for changing a user account’s picture, turning on/off the Guest account, and setting an account to log on automatically are outside the scope of computer networking.

Chapter 9 details setting up Windows Media Player 12 to stream media across the Internet and your network, but first is information on initially setting up Windows Media Player itself. I guess if you never opened the program before, you’ll likely find the information on adding music files, searching through your music library, and setting up playlists helpful. Otherwise, I think you’ll skip over those sections to the streaming media sections.

Before each chapter is a montage of screenshots titled “Chapter at a Glance.” I think it’s an interesting idea because it’s like a photographic summary of the upcoming chapter. Maybe I’m being finicky, but I think inserting the chapter number in the title would have been a nice touch. “Chapter 10 At A Glance” and so forth.

All things considered, I think Network Your Computers & Devices is a good quality e-book. Those who are beginners around Windows 7 or look to network multiple operating systems will find it a great reference guide. You can take a closer look for yourself by viewing this 50-page sample that includes chapter 1: http://cdn.oreilly.com/oreilly/booksamplers/msp/9780735652163-sampler.pdf

If you’re interested in purchasing this book, you can buy the paperback or E-book/Kindle versions at Amazon.com or Oreilly.com

(Disclaimer: I do not receive financial compensation for writing this review.)

Subscribe to comments
Comments are automatically closed after a period of time to prevent SPAM.
Newer Article
Older Article